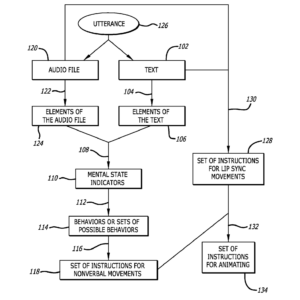 Innovative software developed by Embody Digital enables digital humans and robots to communicate like real humans through A.I. at scale.

Los Angeles, CA. Embody Digital has just announced that they hold exclusive rights to a patent that will revolutionize the A.I. (“artificial intelligence”) industry. The patent (invention number: US9721373B2) produces automatic generations of avatar and robotic behavior, including movements, speech, and emotional responses.

The groundbreaking software from Embody Digital will be of great use for companies seeking better ways to connect with their customers via A.I.

“Digital humans are like A.I.-powered brand ambassadors. They allow you to connect with your customers in real-time, with no human lag. From online chats to social media, digital interactions are now a must for companies who want to provide impeccable customer service,” says  Ari Shapiro, CEO of Embody Digital.

Shapiro says that Embody Digital’s patent will take these A.I. capabilities to the next level, providing a deeper level of emotion from digital humans and robots, including expression and body language.

In the past, the way to power digital humans has been through motion capture, or by hand generating each movement by human animators. These methods are commonly used in the film and animation industry, as well as for holographic performances. However, they are costly, time-consuming, require human intervention, and don’t scale.

“With our patent, we are able to power digital humans and robots through A.I. without a human-in-the-loop,” says Shapiro. “Our patent allows a digital human or robot to communicate with emotion, expression, and body language automatically, for no additional cost, in near-real-time, at scale. This is because our software works by directly connecting users to an A.I. platform, such as IBM Watson, Google DialogueFlow, or similar programs. Any digital human or robot system that is connected to A.I. will need to go through this kind of process, and we have a patent on that capability.”

“With this software platform, we’re essentially helping companies to make digital humans and robots that are more palatable, lifelike, and engaging than previous models, and allowing them to work at scale,” says Shapiro. “In doing so, we are not only streamlining the A.I. experience for users, but we are ensuring that the end result offers the highest level of benefit for users.”

Embody Digital is a software technology company that enables artificial intelligence solutions to power a human-like body and face for digital humans and robots to improve interactions between business and customers. Their products include software that automatically transforms chat-based interactions into digital humans. The target markets include customer service, video games, social media, health care, training, robotics, and other computer-based automated communication.

The company is located in Los Angeles, California.